Alfonso Contrisciani, Certified Master Chef, shares his Master Chef status with 66 others in the United States. He currently is Executive Director of Culinary Operations & Master Chef at Hocking College. His prestigious accomplishments include being named “Restaurateur of the Year” by The International Food & Beverage Forum in 2004’. Chef Alfonso has garnered over 75 National and International awards, including 36 Gold medals thus far in his career. Alfonso competed as a member of Team USA in 1992, 1996 and 2000 in the International Culinary Olympics. In 2000 he captained team USA while winning the world championship in the cold food category.

Alfonso is an accomplished educator, restaurateur, executive chef, pastry chef and held numerous VP and director positions in some of the countries leading hotels, restaurants, universities and food service companies. As Vice President of Culinary Development for Centerplate, Alfonso oversaw several of the largest convention centers in the country. He orchestrated several presidential dinners in Washington DC as well as President Obama’s Inaugural balls.

Alfonso currently resides on his 277acre family farm in Thornville, Ohio. He is an active member in the Ohio Community Agriculture System and believes our future is in a sustainable, organic farming system to preserve our ecosystem. Alfonso is President of Perry County Farmers Market Co Operative. 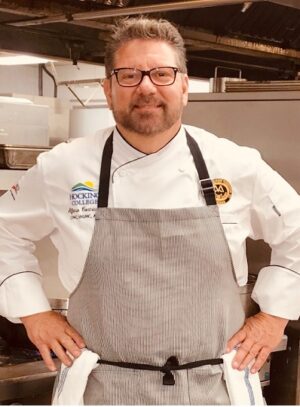